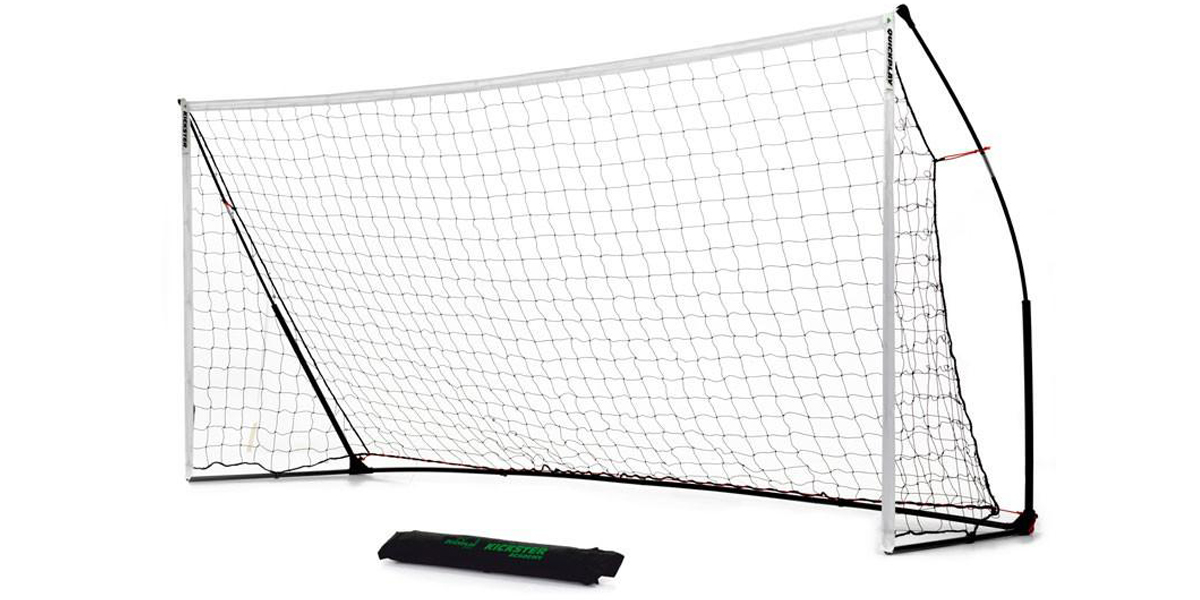 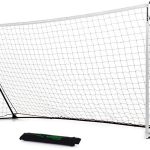 Under 11 and under 12 use 16′ x 7′ goals. Moving up to U11 football is a big change for a young goalkeeper, in fact it is a big change for all of the players. They will be playing 9 v 9 (an increase of 2 players), 30 minute half’s and the offside rules. As I have mentioned on other posts I have a small garden so need to use pop-up goals on local fields for any training I do with my son. I purchased a 16′ x 7′ Quickplay Kickster pop-up goal after seeing the mainly positive reviews online.

Build Quality
The Kickster Academy football goal is manufactured and tested to British Standards BS-EN7 and comes with a 1 year parts warranty. The base of the goal is made from steel sections which attach into each other with locking pins. The poles are pre-attached with bungee cord so this is actually very simple and quick. The corners have welded joints to make the strong and durable. The main stanchions which hold the net in place are made from fibreglass and steel and is again in sections which again easily connect together. The net, which also forms the posts and cross bar has plastic bugs which connect to the stanchions and hoops to connect to the base.

Assembly
The first couple of times will probably take 10 minutes as you work out exactly how the goal goes together. The manufacturer claim a 2 minute set-up which if you were really trying would be achievable but it’s more like 5 minutes to put up and take down. The poles click in place or and are push fit with the stanchions slotting into holders on the base. The net clearly identifies left and right and has two plastic fittings which pop into the top of the stanchions, the base of the net has a loop on each side which clips into the metal base. The stanchions have a tie on each side to pull the side of the net firm. the back of the net has a bungee cord which connects to the base at each end and can be clipped along the back of the frame using two cords.

Portability
The goal comes in handy carry bag, it can be a struggle to fit everything into the carry bag though and I have found the Velcro straps often become loose resulting in an open bag. The goal weights about 9.5kg when packed away.

Supplier
I purchased the goal from Amazon but it can also be found at forcoaches.co.uk, at the time of writing forcoaches were offering the goal for £85.99. Alternative suppliers can be found using google.

Summary
A good portable goal that is not quite as rigid as the Samba but is certainly more portable and much cheaper. Certainly worth the investment for young goalkeepers that are playing in U11 or U12 age groups.