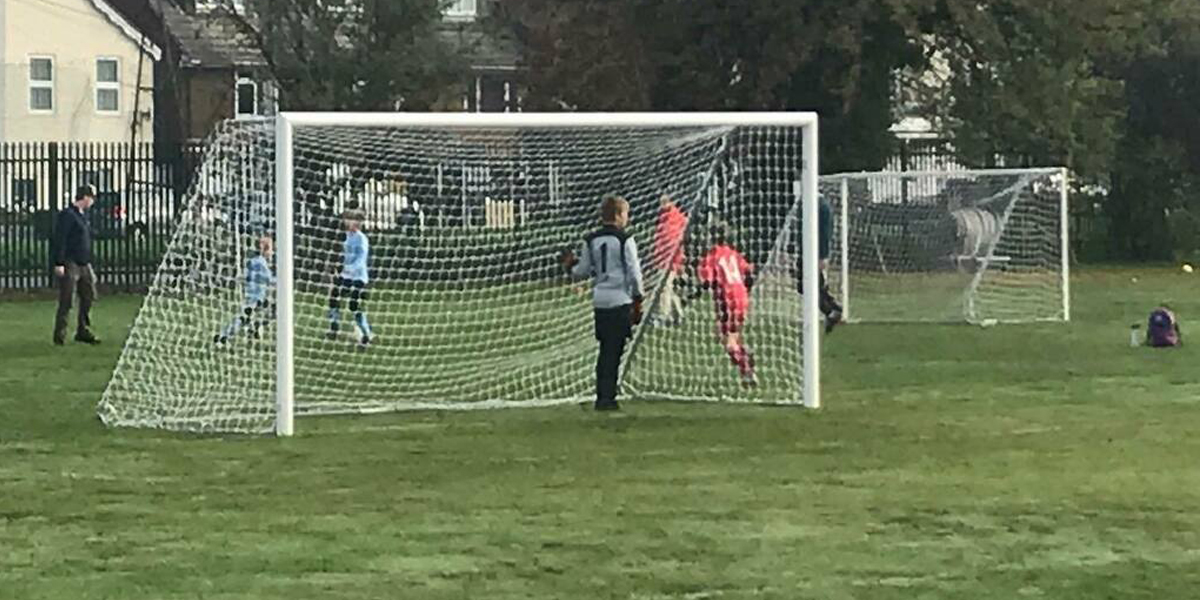 Carshalton Athletic Greens were playing an away match against Spelthorne Sports FC. Despite the weather not being great in the lead up match day the pitch was in reasonable condition.

Carshalton took the kick-off but gave the ball away quickly, Spelthorne immediately went on the attack and forced a fantastic save from my boy who somehow managed to tip the ball over and out for a corner. The corner was well defended. Spelthorne forced another save soon afterwards which was equally as impressive as the first.

Carshalton tried to mount a first decent attack but failed to get a shot away. Spelthorne lost the ball and Carshalton forced a corner. The delivery was very good but unfortunately the header was just over the bar.

Spelthorne won a throw, as it was taken Carshalton was deemed to have fouled the receiving player. The free kick was just inside the Carshalton half, it was well defended. Carshalton’s next attack saw the player clean through on goal, a well placed shot hit the net as the flag went up for offside, close but probably the right decision.

Spelthorne won two corners in quick succession, the first was cleared but resulted in an immediate attack to win the second corner. The second corner was a dangerous delivery but somehow it found it way through everyone and went out for a throw.

Spelthorne then had a period of sustained attacks, forcing a save at point blank range and a one on one save. A high ball needed to be gathered which was no mean feat in the low autumnal sun. Carshalton started to get back into the game and it soon became end to end stuff.

As in recent matches Carshalton seemed reluctant to shoot from distance when the opportunity presented itself, finally someone decided to have a go and the ball sailed into the back of the net. We had ridden our luck but took the lead on the stroke of half time.

Carshalton looked to start the second half as they ended the first, within 30 seconds the ball was in the back of the net but was again ruled offside. Whilst the offside call in the first half was a good decision this one really wasn’t.

Feeling hard done by Carshalton quickly regained the ball and strode forward, a decent cross found a Carshalton player at the back post. With lots of time it was a simple tap in to make it 0-2 to Carshalton.

The game returned to a more even spectacle with both teams attacking and forcing saves from the goalkeeper. Carshalton had the best opportunity as a shot hit the bar. Spelthorne hit the side netting but anything of any danger was handled by the defence and my boy.

Spelthorne to their credit kept looking for a goal and their persistence paid off. After attacking the right wing the ball somehow found it’s way into the box. It was directed towards goal across my boy who managed to get his finger tips to it, unfortunately it wasn’t quite enough to stop or divert the ball and it slowly went in off the post.

Both teams continued to attack though no chances of note were created. The final whistle blew and Carshalton had a sense of relief, it really did feel much harder than it should have been which is a credit to Spelthorne. The perfect start to the season continues with six wins from six. All things come to an end but the players and parents are enjoying the journey.