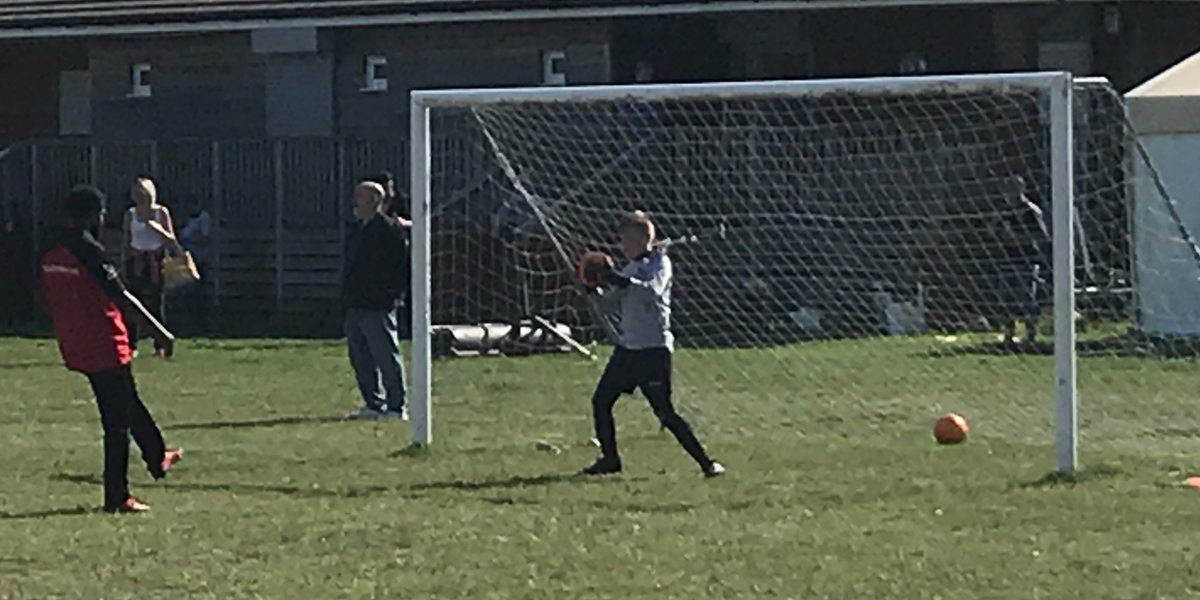 Carshalton Athletic Greens faced the Kew Park Rangers Reds in the first game of the division 1 season. It has been six months since my boys last competitive game for Carshalton Athletic. Winter storms and the Covid-19 pandemic coupled with leaving primary school have seen a lot of change, the return of competitive football though brings some degree of normality.

The game began as a cagey affair, neither team mounted a serious attack in the first five minutes. The first proper attack came from Carshalton, a first time shot went high and wide but the build up play looked promising.

The attack seemed to calm any nerves, a very nice through ball came to nothing as the Carshalton striker was clearly offside, but it was a sign of intent. Carshalton won a corner from a run down the left wing, the delivery was good if only someone was at the back post. Carshalton were creating chances and it felt like it was only a matter of time.

Another corner from Carshalton came after a quick break was well defended, the corner resulted in a throw-in which was quickly taken, the cross and shot was over the bar.

Kew Park Rangers mounted their first attack of the game and forced a save down to my boys bottom left, he conceded a corner but it was well defended.

A Carshalton free-kick about 25 yards out looked to be in a dangerous position, the free-kick was well taken and went over the wall and into the top left corner of the goal. 1-0 Carshalton.

Kew Park Rangers looked to get back into the game quickly and found themselves in a one on one with my boy. He came out fast and dived to gather the ball. He got to the ball first but was took a boot to the head for his troubled. After a few nervous seconds waiting to see if he was fine he got to his feet.

Carshalton began to look for the second goal, Key Park Rangers made some great last ditch tackles but the pressure paid off, a shot from just outside the area was just out of reach of the keeper. Half time and two goals ahead the team were rightly proud of the first half.

Carshalton began the second half the brighter of the teams, a couple of shots early in the half went wide. Kew Park Rangers did try and mount attacks but were not able to get a clean strike of the ball thanks to some good Carshalton defending.

A solid goal kick and a misjudged bounce saw the Carshalton attacker chasing the ball down the right wing, the angle was very acute but a brilliant shot bulged the back of the net. A terrific run to make it 3-0.

Kew Park Rangers refused to capitulate and won a corner, as the corner came in the shot towards goal looked to be heading into the bottom corner but a great save denied them.

Kew Park Rangers conceded a fourth with a well taken goal, despite defending the initial shot the ball fell to a Carshalton player and was slotted into the top right corner to make it 4-0. Carshalton were still not content and kept up the pressure, a decent run saw the attacker pass the ball across the goal to the unmarked Carshalton player. It was now 5-0.

Well into injury time Kew Park Rangers mounted an attack and won a penalty for a foul by the Carshalton defender. In my opinion it was a penalty but others though it to be harsh. My boy looked confident and managed to save the penalty, the rebound put wide by Kew Park Rangers. With that it was full time and the first game of the season ended. It was a great performance from the team who did not seem to miss a beat.