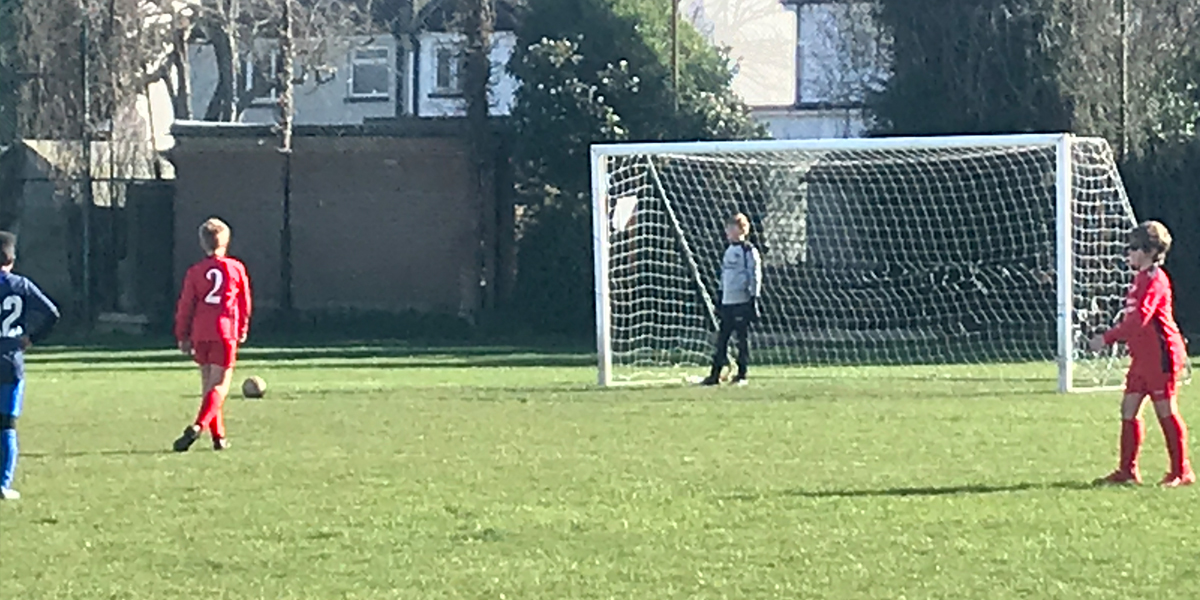 After four weeks of games being called off as well as half term the whole team couldn’t wait for kick-off.

Woking had the first chance of the game, a casual back-pass and casual goalkeeping meant put unnecessary pressure on Carshalton, it was a shock to the system and seemed to wake up the players. Carshalton attacked down the right and crossed the ball into the box, despite the cross being very good nobody was able to put the ball into the net. A quick repeat of this play saw the goalkeeper make a save at the expense of a corner. The corner was easily defended and the scores remained 0-0.

Carshalton looked to be the most dangerous of the two teams and had a one on one chance saved by the Woking keeper. Woking then had a spell of attacking play, first a through ball which required gathering and not long after a corner which was well gathered. Seizing a chance to counter attack my boy thre the ball quickly to the Carshalton midfield who threaded the ball through to the striker only to be denied by a good save from the woking goalkeeper.

Carshalton forced a corner, the corner was well taken and ended up in the back of the net. It might have been an own goal but either way Carshalton were leading and deservedly so. Moments before half time Woking had a free kick in a dangerous position. It was a good free-kick but was well saved, the ball bouncing right in front of my boy.

Carshalton went into half time with a one goal lead.

The second half began and almost immediatly the atmosphere had changed. The Carshalton team were quiet and seemed to be content was playing long balls. Woking seemed confident and had a good one on one chance saved by my boy. Carshalton also had a chance which was saved but Woking seemed to be growing into the game.

A Woking free kick hit the cross bar and was quickly followed up with a shot that needed saving. Woking then had another one on one which was again well saved, the striker was under pressure from the chasing Carshalton defender which certainly helped.

Carshalton scored what we thought was the second goal but this was ruled out for off-side. Nobody could understand the decision and this seemed to affect the players. Another fantastic Carshalton attack saw a pin-point cross land at the Carshalton players feet, a simple tap in which was again ruled as off-side. This took the wind out of Carshalton.

Woking began to attack forcing the Carshalton defenders and my boy into action, finally the Woking pressure paid off and they equalised with a well placed shot in the top corner. The ball had apparently gone out of play in the build up but rather than play to the whistle several Carshalton players stopped and faced the ref. A silly mistake but hopefully a lesson has been learnt.

Carshalton won a corner very late in the game but despite it going into the danger area it was cleared. The final whistle went. Carshalton may have been slightly disappointed not to have won. we had enough chances but were not clinical enough on the day.