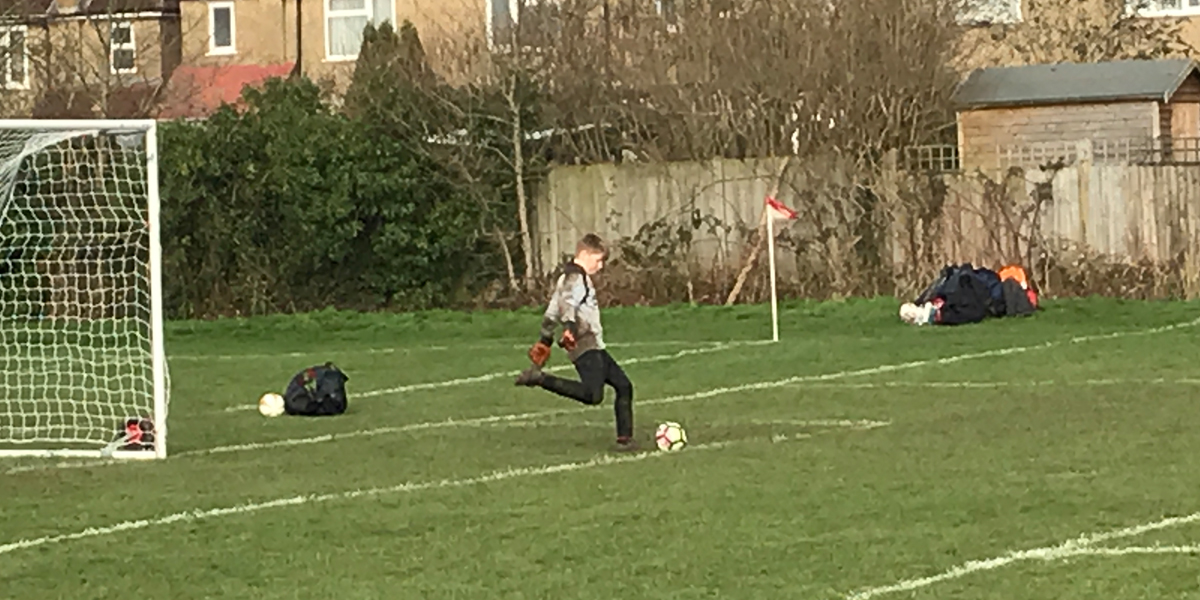 With three U11 teams at Carshalton that play on a Sunday this week the managers decided to switch around some of the players. Henry was given an opportunity to play for the Oranges who play one division higher than the Greens.

The first few minutes of the match saw a battle in midfield which neither team seemed able to break. Eventually a through ball by Carshalton saw us miss a good opportunity to take the lead. The build up play was encouraging and was quickly followed up by another chance that was out wide.

A third chance for Carshalton forces a very good save from the Kingston goalkeeper who tipped the ball around his post. The resulting corner struck the post, Carshalton were dominating the play but had nothing to show for it yet.

Carshalton intercepted a goal kick and forced another good save from the Kingston keeper. He recovered well from his poor kick. Kingston mounted their first attack a hit a looping shot that initially looked benign but needed to be gathered by Henry. He took it comfortably and distributed the ball quickly to enable the counter attack. The shot was struck across goal but was just wide.

Kingston may have been feeling lucky for the game to still be 0-0 and saw a shot from just outside the area just go over the bar. It was a signal that they were still in this game. Carshalton, whose play deserved a goal finally got what they deserved when they forced a great point blank save out of the Kingston keeper, unfortunately the rebound went out of the box and was smashed home from the edge of the area. 1-0 Carshalton.

Carshalton looked for a quick second goal and forced another fine save from the Kingston keeper. Kingston won a free kick on the edge of the Carshalton area which was defended well and almost saw Carshalton score on the counter.

Just before the break Kingston mounted an attack. The attacker was taken out needlessly and they had a free kick in a dangerous position. The free kick was headed out and a mele ensured forcing a good reaction save from my boy.

Carshalton went into half time with a one goal lead.

After a tentative start, Kingston attacked and found themselves through on goal. Henry came out strong and gathered the ball well.

Kingston were now mounting their first real period of sustained pressure. Carshalton were forced to counter attack and saw a very good run down the right almost culminate in a wonderful goal but the shot went agonisingly wide.

Kingston attacked down right and delivered a cross which was neatly finished to level the scores. They looked to take the lead with a ball through the middle, it was well saved by Henry. Kingston won two quick free kicks but both were well defended by the Carshalton players. Kingston forced a save and my boy could not hold onto the ball, thankfully it was cleared by his defenders.

Carshalton won a free kick which was a welcome break in Kingston’s mounting pressure. It went jut wide but it had worked in allowing Carshalton to reorganise and get back into the game. Carshalton began a period of attack which culminated in corner but could not be worked into a goal. Eventually Carshalton played a through ball which saw the Kingston keeper come out to clear it. The kick went wrong and the Carshalton player was left clear through on goal. The ball was slotted home off the post.

The error, clearly playing on the Kingston keeper’s mind forced him to make another mistake. He came to gather a ball delivered from a free kick but was beaten by the Carshalton player. The ball ended up in the net but it was disallowed for an apparent foul on the keeper. The keeper was injured and had to leave the field.

Kingston mounted an attack which forced my boy to come out strong to gather. Carshalton looked to counter attack and forced a good save from the substitute keeper at the expense of a corner. The corner was cleared but only to a Carshalton player, after some good footwork he got the ball through to a striker who scored to make it 3-1.

Kingston won a dubious free kick, The ball into the box was knocked on and the Kingston player scored to make it 3-2. A strong case can be made for offside but the goal stood. The game finished 3-2 to Carshalton and a good performance from Henry. My boy was disappointed to concede two goals but you can’t save them all.