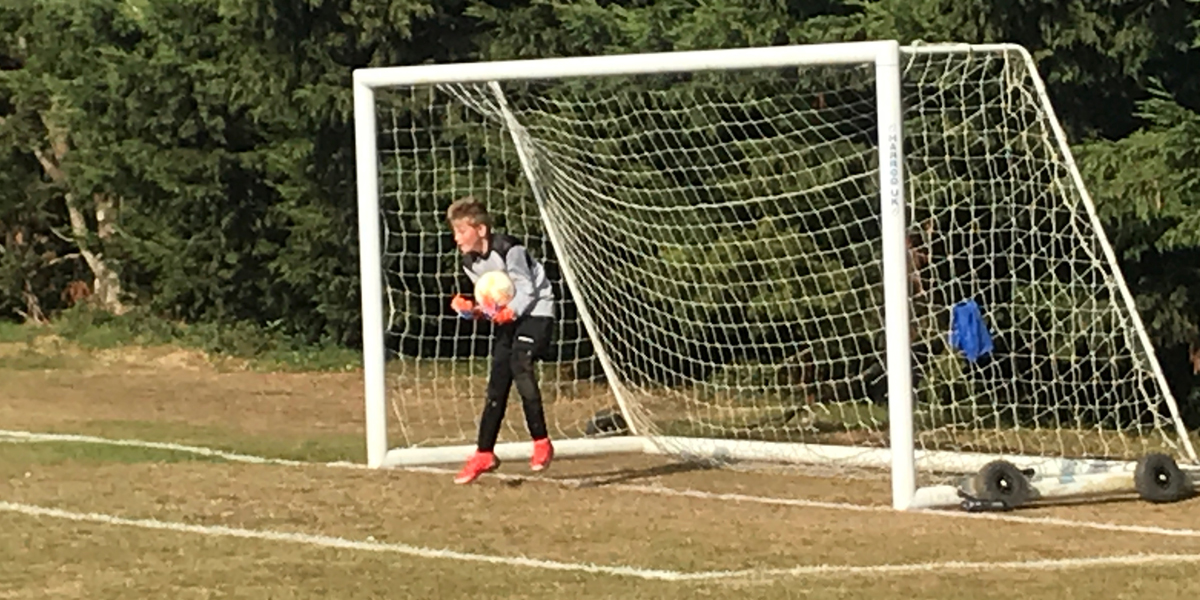 After an unfortunate injury during training to the Carshalton Athletics Whites goalkeeper, MY son was called up to cover for their game against Cobham F.C. Boys today. He was initially disappointed to not be playing for the Greens given the strong start that they have made to the season but as I tried to explain to him, a step up in quality will test him and keep him on his toe

This was the second way game on the bounce for my son. The start the match was the usual cagey affair. Both teams had early chances to take an early lead and my sons kicking today did little to keep the pressure off. Kicking (especially from the ground) is an area my boy is working to improve on and from today’s game it certainly shows he still has a way to go. But both keepers dealt with anything that came their way.

Soon enough Carshalton broke away and took the lead with a well taken finish from close range. The match continued with both teams attacking and counter attacking and guilty of spurning good chances. The half ended with Carshalton 1-0 up.

The second half began much as the first ended, neither team really stamping their authority on the game. After a long goal kick from my son a Cobham player misjudged the bounce and allowed Carshalton in on goal. The Cobham goalkeeper rushed out and attempted a header which was also mistimed, the ball hitting him square in the face. With the Carshalton player clean through on goal he was tackled in the area just as he kicked the ball. The shot went wide but the Cobham defender was judged to have taken the players legs out from behind. It was a touch decision but the penalty was cool hit into the top corner. 2-0 Carshalton.

Carshalton continued pressuring Cobham and were rewarded after chasing a seemingly over hit ball, the Carshalton winger crossing the ball for it to be slotted home from close range. 3-0 Carshalton.

To Cobham’s credit they never let their heads dropped and were back in the game with after getting through the defence and coolly slotting past my boy to make it 3-1. My boy did everything he could, he closed the player down quickly but was beaten by a good finish. After some poor defensive play that allowed Cobham to score a quick second goal, which my boy started with a poor goal kick followed by a failure of the defender to clear the ball Cobham were back in the game and looked to be on the ascendancy with the score now 3-2.

Carshalton though were not prepared to lay down and immediately struck back with a well worked goal coming from yet another long goal kick. The top corner finish was just reward after a battling display from the attacker to keep the ball and working to get into space to let off a thunderous shot. 4-2 Carshalton.

With little less than five minutes remaining Cobham pressed hard and deservedly scored again to make it 4-3. My son might have felt he should have saved the shot but Cobham’s pure dogged determination and refusal to quit were clear for all to see. Carshalton would have been quite within their rights to pass the ball around and see out the final couple of minutes but with Cobham pressing high up the pitch they were left open at the back and Carshalton struck a late goal to make the final score 5-3.

Three wins out of three for my son and the first win of the season for Carshalton Athletic Whites. Today’s game highlighted some areas he can work on in training this week but I think he handled the step up in quality quite well. On to match day four and the potential for double duty.